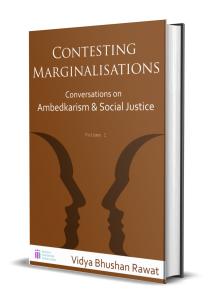 The book, a collection of conversations with 24 eminent Ambedkarites (activists, poets and authors), dalit activists, scholars and intellectuals, engages with a wide range of issues from the lamentable state of the Ambedkarite movement to the continued marginalisation of dalits in modern India, Ambedkar’s differences with Indian Marxists and suggestions for reviving Ambedkarite movement. Conversations in the book capturing the lived experiences and observations of the interviewees provide insights into important issues, some of which have hitherto not attracted much attention in academia.

It is difficult to define Ambedkarism as simply the thoughts of B.R. Ambedkar: Unlike many other thinkers and theorists of modern times, he, the jurist and political and social reformer, neither believed in a fixed ideological system nor did attempt to produce one. He was more pragmatic in his approach to social problems. Throughout his life, Ambedkar advocated and worked to end the deeply entrenched caste system and build a society based on liberty, equality and fraternity.

An agreement is discernible among most interviewees that the Ambedkarite movement was able to achieve only a limited success in attaining what Ambedkar had strived for and envisioned throughout his life. A range of reasons is offered for this. Prime among them was the failure of the earlier urban-based educated leadership of the Republican Party of India (RPI)—a party founded by Ambedkar in 1956—in extending the movement’s reach to villages, in spite of Ambedkar’s strong wish, where a majority of dalits lived and turning the party into another Scheduled Caste (SC) organisation. Although Ambedkar in his initial years had stressed that any dalit movement should be led only by the dalits, he himself slowly evolved wanting to include other working-class people from all castes in his Independent Labour Party and later the RPI, making it an anti-Congress, anti-Communist opposition platform, mandated not only to speak of challenges faced by different castes but focussed on taking up economic and social causes for the advancement of India. Soon after his demise, the party split. Some leaders deviated from Ambedkarism towards communism. The Dalit Panthers movement, started in the 1970s by radical Ambedkarite youth, also split on the same issue.

Ambedkar’s fractious relationship with the Indian Marxists goes back to 1928 when Shripat Amrit Dange, leading the first strike of the Girni Kamgar Union, did not agree with Ambedkar’s suggestion of including the issue of equality and equal entitlement within the ranks of workers. Later in 1952, Dange and the Communist Party of India worked towards ensuring Ambedkar’s defeat in Bombay North constituency in the 1952 general elections. Reportedly, Dange instructed his supporters to invalidate their ballots in the reserved constituency rather than vote for Ambedkar. Ambedkar duly lost and attributed his defeat to the Communist campaign (Anand, 2012; Rajnarayan Chandravarkar, 2009). His disagreement with the Communists was due to what he thought was their inability to recognise that class in India was also experienced within the framework of caste. At the same time, the lawyer was not against addressing the huge livelihood issues facing dalits as understood by his followers in the RPI or in the Dalit Panthers movement. Even today, differences between the dalits and Communists remain and a large section of Ambedkarites do not wish to forge any alliance with them.

The book highlights internal differences among followers of Ambedkar and their limited understanding of Ambedkar’s pragmatism. For instance, Ambedkar in his iconic tome, Annihilation of Caste, argued that the core characteristic of caste was hierarchy; each caste oppressed the caste below it in this hierarchy. Since the oppression of dalits stemmed from caste ideology, caste, said Ambedkar, should be annihilated, and one way of doing that was to break endogamy. Not everyone agreed. Followers like Raja Dhale, one of the founders of the Dalit Panthers movement, opposed inter-caste marriages as he said it would dilute dalit identity. Even successful dalit leaders, such as Kanshiram and Mayawati, seemed to be exclusively preoccupied with the questions of identity, and symbolic representation having failed to foreground the question of land reforms and material entitlement to dalits.

The continued marginalisation of dalits in socio-economic and political domains was also attributed to multiple factors. The first was the absence of a unified dalit identity due to the huge differences between Shudra and antiShudra communities and the untouchability practiced by them against each other. This graded inequality in most dalit castes impeded the formation of a unified identity. Ironically, the policy of reservation seemed to have magnified the existing chasm across these communities as very few of them—Jatavs in west Uttar Pradesh, Chamars in Rajasthan, Mahars in Maharashtra and a few others— witnessed progress due to the reservation given in public sector jobs, while other communities lagged behind.

The increasing Sanskritisation of dalit communities, seen in their growing imitation of upper castes ceremonies and rituals, in marriage ceremonies, festivals, cremations, visits to temples and pandals, made it even more difficult to unite them against their main oppressor—rigid Hinduism. Not surprisingly, very few among dalits who were educated or occupied senior positions in government departments made a conscious effort to counter the dominant Brahminical value system or the political discourse they influenced. The weak implementation of reservation policies in government recruitment also adversely impacted their socio-economic upliftment. The National Commission for SCs and Scheduled Tribes (STs) reported that in central public sector enterprises, only 8.4 per cent of A-Grade officers belong to the SCs, when the figure should be 15 per cent. Even in a prestigious university like Jawaharlal Nehru University, regarded as a bastion of progressive social scientists and historians, only 3.29 per cent of the faculty come from a SC background, while only 1.44 per cent are from STs (Santosh & Abraham, 2010). Continuous privatisation and a consequent exclusion of class three and four jobs (where dalits have a high possibility of recruitment) from the ambit of reservation further weakened their socio-economic condition.

The anti-reservation lobby over the years strongly advocated the introduction of creamy layer within the dalits on the pretext that benefits of reservation had been cornered by few dalits. For dalit activists and Ambedkarites, it was a conspiracy to deprive the dalit community of the guidance and leadership of their intellectuals and successful people among them. The introduction of a creamy layer within SCs would not hold any ground as long as the reservation policy was not properly implemented. It was the Brahminical mindset of the recruitment system that has impeded the development of the community by not creating or filling positions as mandated in the Constitution. Brahminical forces also tried to scuttle a unified dalit identity by creating divisions within dalits and highlighting the issue of sub-identity among them. The media, largely controlled by upper castes, also worked against dalits by under-reporting atrocities against them and marginalised groups. On the other hand, those who highlight injustices meted out to dalits were threatened by forces which believed in maintaining the supremacy of Brahminism. While dalits are often implicated in fabricated court cases, they are denied justice when they are at the receiving end of caste-based atrocities and violence, often, because of a dearth of good quality lawyers among them.

Interestingly, caste, the argument goes, as an identity does not go away even if one converts to another religion or settles in distant geographies. Dalits settled in the United Kingdom are discriminated in all spheres of life by upper castes Indian immigrants settled there. There are separate prayer meetings in the churches for upper caste converts to Christianity in which dalit converts are not allowed. In the several villages in Punjab as well as in the UK, dalit converted Sikhs have their own gurdwaras and temples and are not allowed in the ones controlled by upper castes.

The book does discuss the possible measures needed to be taken to revive the Ambedkarite movement and further the process of social justice. While a few Ambedarites have considered no other outfit, political or social, worthy of an alliance because of their leadership is in the hands of upper-caste Hindus, some others have advocated a broader alliance of class and caste based struggle. While the class-based struggles that brought about revolutions in the last century and indirectly induced many progressive changes in the world have eventually been reversed in the recent years, the identity-based movements could not make even a dent to their oppressors. It is important for dalits to adopt a class orientation to be successful in their anti-caste struggle. For them, it was the only approach that could bind all oppressed people together and bring in a hope of annihilation of caste.

In spite of several editing flaws in the book, the rich repository of groundlevel experiences of the interviewees makes it a good read for those interested in studying the anti-caste and Ambedkarite movement as well as its history in independent India.